skip to main | skip to sidebar

Proudlove does it again!

The Arrested Development, as Nathan calls it, is like his Blacktron II, but set on it's side, and Blacktron 1 coloured. This was also his entry in SHIPtember, so he built it in less than a month! Seriously impressive!

So I am off to Brickcon in a couple days, so don't expect any posts in the next week or so. (I also am led to believe that Nathan is bring this bad boy to Brickcon. I cannot wait!)
Posted by Elephant Knight at 7:50 PM No comments:

Yup. It is finished. Well, it has been finished for awhile, but I just finally got around to taking some proper pictures.
So without further ado, I present my life-sized Blacktron 2005 series Dalek. More pictures in the Photostream
Posted by Elephant Knight at 1:49 PM 1 comment:

I am proud to present my latest SHIP, the Epsilon Elnath.

When I discovered there was a contest/building challenge on Flickr for building a SHIP in September, I could not resist the challenge. Even though there was a whole month to build it, It took me only 3 days to build the Epsilon Elnath. Clocking in at 120 studs in length, it isn't my longest SHIP but it might be my favorite. It certinitly is different from all my others. I plan on bringing it to Brickcon, so if you are coming you will be able to see the Epsilon Elnath in the brick!

You can check out more picture in my photstream here.
Posted by Elephant Knight at 8:14 PM No comments:

Well, since there hasn't been much Blacktron lately, I thought I'd go and dig up some old MOCs of mine (and maybe I'll do more than just mine) and review them.

Since this is my first OMR (Old MOC Review) I may as well start from the very beginning, and review my very first Blacktron ship, the Talana. I built this way back in 2006 (well, I uploaded it to Brickshelf in March of 2006. I may have easily built it late 2005. First thing whenever I look at this now, I think "Where are the guns?" The description on Brickshelf calls it "The Blacktron's most powerful ship". Umm. sure. Mind you, when I built it, it WAS my largest, coolest,  best ship ever. Not so much. Also, I am fairly sure I used antennae's as guns back then.

At the time, what made this ship the coolest one ever, was the sloped front. I remember building it, and I was going to build it with a flat front (Imagine how ugly THAT would look!), and during the build, one of my older brothers walked in and suggested I used slopes for the front. That moment of decision feels like a very important point in my ship building 'career'. It was that point when I realized that spaceships can look COOL, and not BOXY. It also resulted in a (in my opinion) very distinct looking ship.

The rear of the Talana isn't up to snuff of what I build these days, but it still isn't too bad. I am not too sure if those trans neon green parts near the edge on the main body were supposed to be engines, or just decoration. I suspect the former. You can also not the Moonbase module attachment at the rear. (Kudos to you if you still know what that is!) An interesting fact: This isone of my few Blacktron ships that the point of access to get in wasn't an afterthought. I tend to forget about hatches when I am planning ships.

The interior is awfully roomy, and also lacking in a few necessities. Like sleeping quarters. And a lavatory. But things like that weren't important back in the day. Things were still heavily inspired by Star Trek, like the bridge layout, and the whole transporters. My Blacktrons don't have those anymore. And that warp core looks very unsafe. And it bugs me that it isn't in the middle.

One last thought is of the crew. Looking at it, I can say that only one (Third from the right) no longer exists, though that's just because the reverse side of his head looks much more Blacktron.

Final thoughts. The landing gear was one thing that also was ahead of it's time. As fragile as it tended to be, it was my only ship at the time that had 'retractable' landing gear. I was also still using baseplates! I though it was awesome at the time that I could use white baseplates for a ship. I didn't care about the underside, evidently. Now to rate it:

Exterior: 7.5/10 The design was revolutionary at the time, and it is fairly clean, though the use of baseplates mean that the bottom was pure white and flat.
Interior: 6.5/10 Quite roomy, but lacking certain essentials. Engineering is especially ugly.
Nostalgia: 9.5/10 I had so much fun with this ship. I was only 14 at the time, and I was a bit late in maturing, so I was still playing with my stuff at the time.
Colour it Blacktron: 8/10 (Colour scheme) It is actually quite well balanced. Lost a point for not having enough trans neon green, and another for the underside.
Swooshablity: 9/10 Bit hard to recall how well it swooshed, but I seem to recall it was pretty good, though the landing gear had a tendency to fall off a lot.

Final say: 8.1 Nostalgia had a lot to do with it.
Posted by Elephant Knight at 6:40 PM No comments:

Sorry for the lack of posts lately, but I have been on a building frenzy, working, as well as doing lots of non-Lego related stuff. 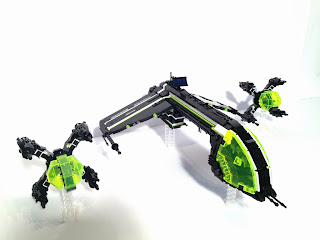 Flickr user markus19840420 was inspired by some older creations, and I think I recognize the original source, but the end result is nothing short of fabulous. Very sleek design. Gotta love those quarter domes used like that.
Posted by Elephant Knight at 7:22 PM No comments: