skip to main | skip to sidebar

Okay, time for another blast from the past (more like "dodge the incoming missile barrage from the past") This time, I am looking at my first SHIP, the Alpha Centauri. This ship was inspired by the ship that came with 6988 Alpha Centauri Outpost, hence, the name. Heck, I even wrote a story about this ship, and am working on a more proper book. 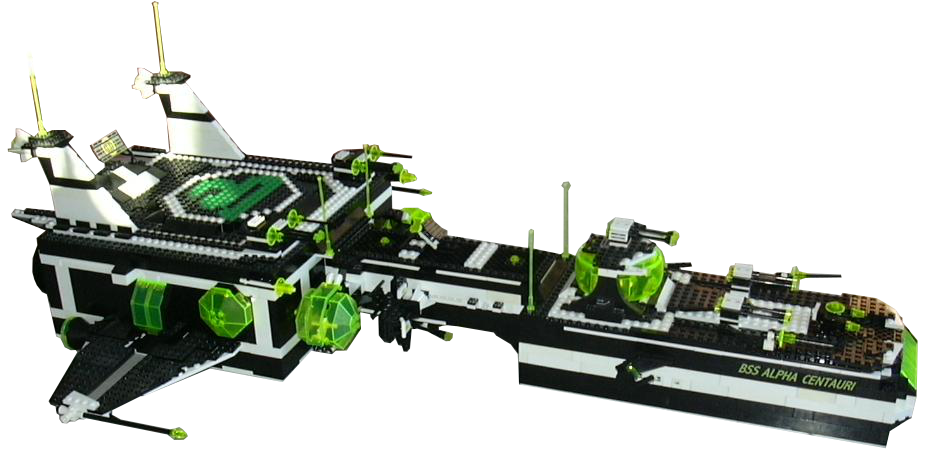 When I first built this ship, and when I took the pictures, there was a lot of modifications. I had this ship built for over 6 months, and back in 2007, that was a long time! Actually, it might have been over a year, come to think of it.... Either way, it got modified a lot over the course of it's life. A few mods I can easily recall: The forward section was extended from a 16x32 baseplate, to a 16x32 and a 8x16 baseplate. The X-pod container was another. The interior, especially the rear section.

Looking at it now, two thing come to mind. First, WOW! What a mess! The colour scheme is very messy, and has too much white. Secondly, how does this thing move? The engines are tiny and/or flat. That would never do these days.

Ok, on to the interior. Well, it certainly had everything. A bridge, sick bay, transporters, crew quarters, brig, even a conference room! Everything! Oh, wait, where is the engineering? Ah, tucked under that ledge in the forward, right hand section of the aft part of the ship. More support for my theory that this ship can't move...

Final thoughts. This stands as one of the few Blacktron II ships that never had landing gear. Not that building landing gear would have been easy (Or smart) with the bottom being built entirely out of baseplates. As of now, I have rebuilt this once, done a couple others that were loosely based on this, and have plans to rebuild a better version in the near future, AKA, when I take apart my Dalek. In 2007, I took this to a local fair, and it won a 2nd place.

Exterior: 6.5/10 Way to cluttered, too much white, still used baseplates. Overall shape would become a classic shape I would use.
Interior: 8/10 Had almost everything, but wasn't laid out very well. Also, engineering sucked. More of a space station then a space ship, really.
Nostalgia: 9/10 I still think back fondly on this, despite it being my ugliest ship, IMO. The backstory that it has probably has a lot to do with it.
Colour it Blacktron!: 7/10 All the right colours, but very poorly balanced. And the baseplates don't help...
Swooshability: 4/10 I didn't understand the concept of internal support back in 2006/07. Middle section was very weak. I recall having a hard time moving this from one place to another.

Final say: 6.9 Much lower than the Talana, but this one stretched my collection to the max at the time.
Posted by Elephant Knight at 8:31 PM No comments:

What happens when you combine the Spectral Starguider and the Mega Core Magnetizer?

You get this awesome beauty by spaceruner, that's what. It's very sleek, and it takes awesome stuff from both and combines them together very well. The little ship is pretty nifty, too.
Posted by Elephant Knight at 6:50 PM No comments:

As soon as Rogue Bantha posted this, I knew most Space Police agents would be afraid to go outside. This thing is just scary! The brick built background is also great, you don't see that enough. Great use of the new Collectible Minifig.

Going back inside my cave, but here are more pictures if you want
Posted by Elephant Knight at 1:17 PM No comments:

Nothing wrong with a bit of Microscale

Jacob Unterreiner of Flickr has posted this unnamed Micro Blacktron I ship. But really, when it's this cool, who needs to bother with names?
Posted by Elephant Knight at 5:59 PM No comments:

A new year is here

Unless you've been living under a rock, you know that it is 2014. So let's kick off the new year with an older creation of mine, but one that I never took pictures of until now. Yup. It's a forklift. Wait, what would the Blacktrons need with a forklift? well, so they can move their ships around. The forklift is heavy enough to lift the Arial Intruder, no problem, thanks to a couple of boat weights, and lots of plates. More pictures can be found here.
Posted by Elephant Knight at 5:39 PM No comments: